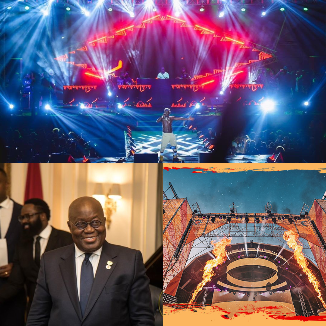 The president of the republic of Ghana, Nana Akufo-Addo through the Ghana Tourism Authority has signed a five(5)year deal with Event Horizon, the organizers of AfroNation to have the event hosted in Ghana for an additional five years.

This was revealed by Gabby Otchere Darko, a leading member of the NPP and cousin of the president. According to him, among the major deals that was struck by the Ghanaian president at the UK-Africa submit, signing a 5 year deal with Event Horizon to have Ghana host the Afro Nation annually for 5 more years is the highlight of the submit.

Gabby Otchere Darko who is also the president of Danquah Institute believes that, Investors, entrepreneurs, small and medium size businesses have at least a 5 year investment to focus and exploit on the advantages this event comes with.

“ For me, beyond Akufo-Addo’s topical solid performance at the panel discussion and all the deals done, a major highlight of this maiden UK-Africa Summit is the 5-year Africa exclusive events deal for Ghana to host Afro Nation annually. This deal was signed in the presence of President Akufo-Addo between the Ghana Tourism Authority and Event Horizon Entertainment Ltd, operators of Afro Nation, “whereby Ghana would host Afro Nation in Africa exclusively on an annual basis for the next five years.”
This means, investors, entrepreneurs, small and medium size businesses have at least a five-year investment plan to focus on to exploit well the anticipated annual Christmas traffic. The trade boom will be sustained by your thinking government. #KeepFaithWithNPPBeyondTheReturn
#GhanaBeyondTheReturn “

Ghana became the first African nation to host the Afro nation event in Africa since its inception. The event was first hosted in Portugal and later Ghana.Though the event was hit with some court issues, It enjoyed massive patronage from patrons all over the world and ended up becoming a huge success.