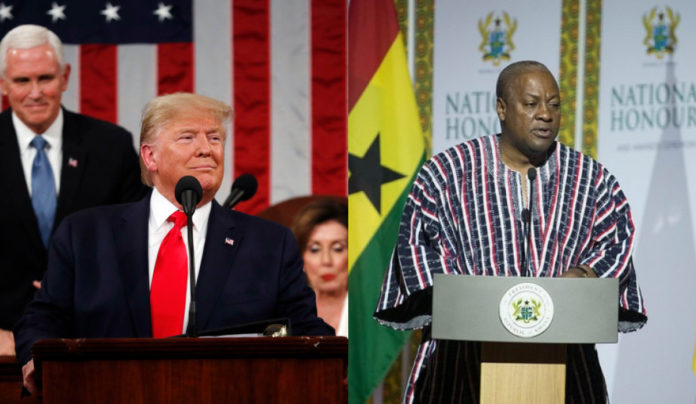 The President of the United States of America, Donald John Trump delivered his State of the Union yesterday and to the surprise of many including myself who had started paying much attention to the things that goes on in the US than Ghana, POTUS took the bull by the horn and gave one of his best presentation.

Donald Trump , is widely not known for his flawless delivery and presentations that were devoid of attacks and insults, so watching him give such a remarkable speech about the state of the Union everyone on both sides had moments to applaud the president.

For me who was watching far in Ghana, aside his attempt not to insults his opponents like he usually do, i was marveled by his theatrical presentation. Purposely made for the camera.

It reminded me of Former President John Dramani Mahama’s 2016 evidence-based state of the nation address.

During former President Mahama’s 2016 State of the Nations address he brought in persons who had benefited from some social interventions of his government and at the mention of their names, they stood up and waved to all present.

Mahama in his speech, pinpoint about Ten (10) citizens he claimed had benefited from his changing lives interventions. This included a woman who had to give birth in a newly built polyclinic in her area. According to the then president, the lady had to travel a long distance to give birth to her first child. There was also a beneficiary of his policies who had started rearing pigs as a business.

All his beneficiaries were in the audience and were made to wave anytime the president mentioned their name.

Fast forward into 2020 and the President of the most powerful country in the world is caught doing same. For a second i was proud that Donald John Trump had seen how effective that novelty is and had decided to adopt it.

During POTUS speech yesterday, he brought into the gallery, people he had either promoted or affected their lives positively with his policies.

The icing on the cake was when he surprised a woman in the audience by bringing her husband home from his mission and allowing him to surprise her.

Pure TV antics but it worked for Donald.

Don’t know if he got the idea from our former president but clearly, POTUS Donald Trump really did the Mahama style.

African leaders rally behind the WHO director after Trump shifts blame on him for the deaths in the United States.

The United States needs an Akufo Addo and not a Trump