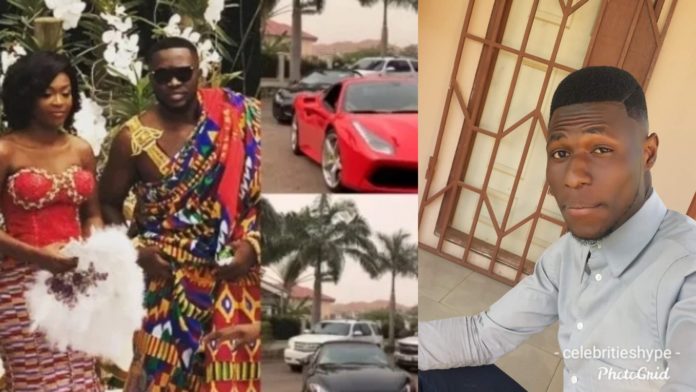 The flamboyant wedding between Despite’s first son Kennedy Asante and his long time girlfriend Tracy has left everyone talking.

The traditional wedding, which took place at a residence in Trassaco was flooded with an avalanche of expensive cars and gifts.

The items presented to the bride from hinsight would cost a million as maid after maid, walked in with a huge parcel in hand.

This aside the number of groomsmen and prominent people that announced their presence, the marriage proposal took place in a jet.

This has got guys tightening their belts and asking if ever they would also enjoy such prestige.

Well, a blogger by name Gideon Ofori who got married not long ago, has asked guys not to get worked up over this wedding.

According to him, he married his wife with Ghc 4,000 and he’s still alive. He is therefore asking guys not to kill themselves over Despite son’s expensive wedding.

“You want me to kill myself because Osei Kwame Despite’s son spent over billions for his wedding?

Massa my wedding budget was around 4000ghc but at the end of the day, ebi Tonga we will all eat…and die!!

To God be the glory- Despite’s son , Kennedy Osei praises God for a successful wedding