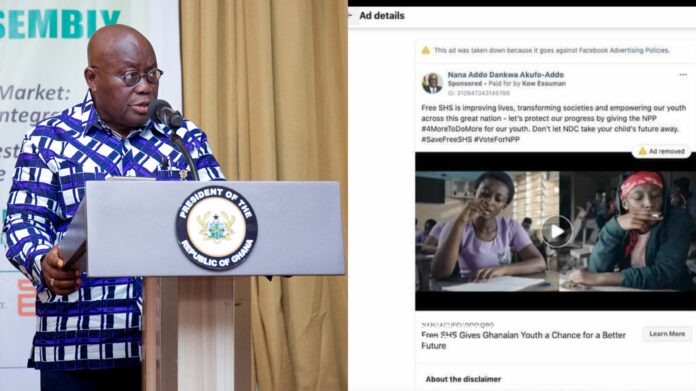 Popular social media platform, Facebook has taken down an advert sponsored by persons closer to the president, Nana Akufo Addo for violating its policies, terms and conditions.

In an attempt to seek reelection and retain his seat, the government has used specially crafted video ads to drive in the message of the Npp administration.

Among the many achievements of the Npp government is the rollout of the Free SHS that has seen a platitude of young Ghanaians who might have missed out in secondary education due to the lack of funds, enrolling in these secondary schools for free.

The government in an attempt to propagate its achievements, put together an advert and tried boosting it on Facebook.

The advert was subsequently blocked and pulled down by the site after it judged that the sponsored video had violated some of it many rules and regulations.

Though Facebook is yet to explain exactly what infringement led to the advert being taken down , it can be deduced from the attached screenshot that, Facebook attributed the thumbnail of the video for exploiting children as a lass could be seen smoking in the video.

Nana Akufo-Addo will be competing with John Dramani Mahama of the NDC on who becomes the president of Ghana come December 7th.