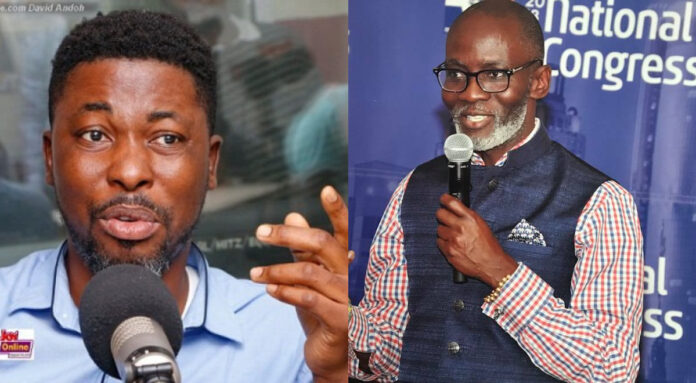 Musician turn political activist, Kwame Obeng Asare , known popularly as APlus has taken to Facebook to narrate an encounter he had with Gabby Otchere Darko , a Private Legal Practitioner and member of the NPP about what will happen to himself and a fellow member of his party in the case the NPP lose power.

According to the founder of the “The Peoples Project” (TPP), Gabby told him he had advised Philip Ayensu,who happened to be a board member of PDS to sponsor the fortunes of the New Patriotic Party (NPP) or suffer being jailed or prosecuted by the NDC if NPP loses election. In order to prevent such an outcome, Philip Ayensu should used his money to push the NPP on into victory.

You are there shouting 4more4Nana when Gabby Otchere-Darko himself told me he has told Philip Ayensu that if NDC comes to power they will arrest he Gabby first and Philip Ayensu second so when he gets money he should use it to sponsor NPP to stay in power.

If they have not done anything bad why are they scared of being arrested in future???? You see this table I’m shaking? It’s a trap. Don’t fall into it. You can continue supporting these ungrateful, disrespectful, arrogant, dishonest people. Me I don’t care.

The things that will happen in these 2 months to election errrh!! Wait!!!

Mr Philip Ayensu name was synonymous to the PDS scandal that bedeviled the country some months ago.

In what appeared to be a telephone conversation between the trio and was played on Loud Silence Radio by Kevin Ekow Baidoo Taylor, the host of “With All Due Respect”, it was alleged that Philip Ayensu, Edward Akufo-Addo and Gabby Otchere-Darko were planning how they could own the shares of PDS.