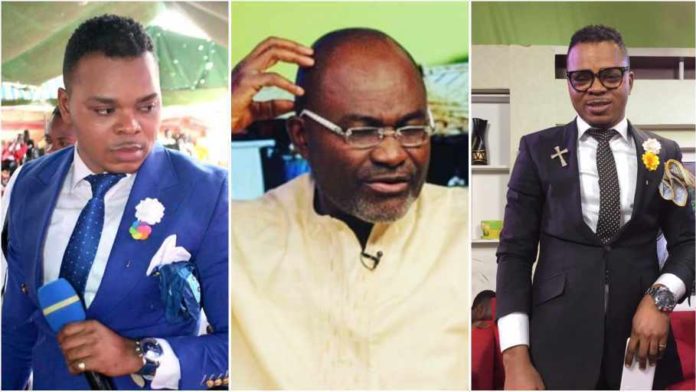 After promising that he has forgiven Obinim on live TV, the loudmouth politician has taken back his words and has exposed Obinim stating that his (Obinim’s) father has been bedridden with his leg rotten to date.

From all indication Hon. Kennedy has gone haywire as nothing he said can stop him and he shall keep exposing the atrocities of Obinim till he has no more.

It could be remembered, Hon. Ken on live TV said he’s had several calls from people begging him to leave Obinim alone and not to further expose the Bishop, but in the wake of their plea, Obinim keeps pushing his junior pastors (Kelvin and Emma) to defame him.

In that regard, he has changed his mind, he has vowed to go all out on Angel Obinim and no one can change his decision. He warned that no one should call and apologize on behalf of Angel Obinim.

In a new video, the NPP strongman has further revealed top secrets about Obinim, he said the man of God is fake as he has not been able to heal his own father who is suffering on his sickbed with a rotten leg(as earlier mentioned above).

“If you have the power to heal why have you not heal your own father up till now? You are a Fool!! He is suffering on the sickbed with leg rotten and you seem to care less about that. Nobody should step in I will deal with him” Hon. Kennedy said.

ALSO READ  Man in a state of shock after his wife-to-be sold her wedding ring costing 3,000 ghc for 1,000ghc to pay her school fees

In his allegations, he said, Bishop Obinim has rented an apartment for one of his girlfriends called Edna around lakeside where he goes to have affair with her.

He also added that Angel Obinim has been having a sexual relationship with the females in his church.

Just In: Two Gunmen Tried To Murder Kennedy Agyapong In His Mansion At TEMA

Must Watch: Hon Kennedy Agyapong Got Angry, Blast His TV Station Workers For Almost Disgracing Him