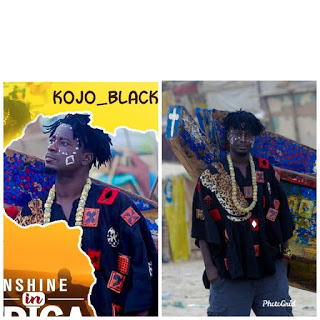 Not long ago, the Ministry of Tourism, Arts and Culture, through it minister, named Sarkodie as the ambassador for the year of return 2019.

This was probably for his outstanding speech at the 2019 edition of the BET hip-hop award when he was crowned the Best international flow winner.

This new fate did not come without criticisms as artiste manager Bulldog and Mutombo weren’t convinced by the ministry decision.

According to Bulldog, there were other artists who deserved that accolade and not necessarily Sarkodie while Mutombo on the other hand, argued that, the time period given Sarkodie was too short for him to have any positive impact since in his view, the Year of Return ends after December this year.

A new person to add his view to this whole debacle is American based Ghanaian Afropop artist, Kojo Black.

According to the upcoming artist, he is more deserving to be named the Ambassador of the government of Ghana’s Year of Return initiative.

The lad took to his Facebook page to outline why he was the better candidate for the ambassadorial role.

According to him, his song “Sunshine Africa” did enough for the year of return than any other initiative. He, however, didn’t downplay the prowess of Sarkodie

He also pleaded on the government to move away from the attitude of always supporting the big names and support the upcoming artist also.

“I’m the Deserving Ambassador for the year of Return 2019 ,Not Sarkodie .
Sometimes,It saddens how Ghanaians misplace priorities,I was supposed to be the Ambassador for the year of return,not Sarkodie.That is not today-to say Sarkodie is not a good artiste or I have any issue about him ,he’s the the best rapper in Ghana ,butI have sent messages that are pushing the year of return through my song “Sunshine in Africa “
Government should please assist and support upcoming artiste when the need arises ,we are also trying to do something for the nation ,our efforts must be rewarded “