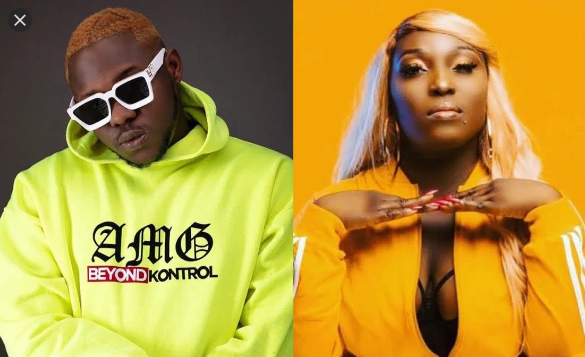 It seems the beef between rapper AMG Medikal and Eno Barony will never see a successful demise since at every turn, Medikal continuously resuscitate it.

Yesterday, the Sowutuom rapper wittingly took a jab at the female rapper when he posted a picture of her in a gold colored dress with dark spots in it. According to Medikal, Eno Barony looked like a Cat woman. Eno replied back by comparing Medikal to Johny Bravo. The cartoon character with a bigger body part with skinny legs who gets bounced by every woman.

As if that was going to be the end of it, Medikal has again taken to his social media account to claim that, he is the reason why Eno Barony got nominated for the VGMA female rapper of the year. According to him, Ghanaians should respect his name and that of Barony.

Medikal how ever, demanded Eno Barony compesated him with a house in Atlanta.

“Ghana music industry should really respect rapper Medikal ! I’m the reason why Eno got nominated for rapper of the year ! First female ! Respect My name and hers, this is history. Eno for buy me house for Atlanta sef”