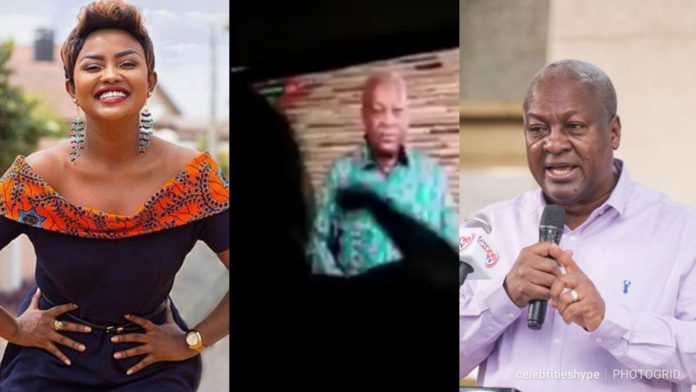 After receiving loads of insults from sympathizers of the NDC, Nana Ama Mcbrown has come out to denied reports that she is the lady seen in the viral video knocking the head of the former president on her Tv.

The veteran actress in a video that’s gone viral, was purportedly seen knocking the image of the former president on her screen when he was having a virtual conversation with Ghanaian.

Even though the lady sounded like the actress, she has come out to deny being the person in the video. According to the mother of one, there’s no way she could behave in such manner towards the former President of Ghana.

She distance herself from the video and called on every to disregard it.

“DISCLAIMER :
I AM NOT THE ONE IN THE VIDEO

My attention has been drawn to a video circulating on various social media platforms in which a female figure, which some claim erroneously and strangely to be me, can be seen under the cloak of darkness, knocking the head of the image of Former President John Mahama on the screen of a TV during his Digital Convesation with Ghanaians last Thursday.
I hereby distance myself from that video and unequivocally state that I am not the woman in the video, and there is no way will I ever behave in such a reprehensible manner towards the Former President of Ghana whom I hold in high respect, or indeed any other person.
By way of emphasis,I would like to entreat the general public, the media and most importantly my fans to disregard it.