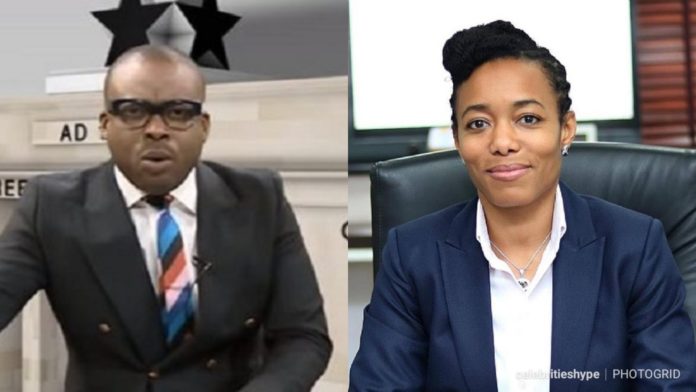 Broadcast journalist and a member of the National Communications Authority, Paul Adom Otchere has used his late night vindictive program “Good Evening Ghana” to lambast Zanetor Rawlings, the member of Parliament for Korle Klottey over her allegations against the ruling government.

The member of Parliament on Tuesday while providing food for head porters (Kayayei) in Accra, alleged that state agencies were politicising the relief items in their distribution.

She said “This is a humanitarian crisis, women and children are hungry. They are locked down because it’s not their fault the virus is in Ghana.”

“People are literally being asked to show evidence of their party membership before being given food.

“This is not acceptable [and] this is very sad [because] the virus does not show whether you are NDC or NPP before it infects you, ”

Her claims were immediately debunked by the Ministry of Gender, Children and Social Protection. They described her accusations as a complete fabrication.

Unfortunately for the member of Parliament, she was literally put under knife by the broadcaster, who on a numerous occasions, has turned his platform to a circus where he cunningly insult, consciously demean and diabolically rant at people he disagreed with like an unhinged person.

Paul Adom Otchere, whose wife is alleged to have also gained an appointment in the NPP government as a board member of the Free Zone Board, called the MP out as a shameless person who only became an MP because of her family background.

According to the journalist, the MP did not provide any evidence for her allegations.

Tearing her into pieces without sounding rational, Paul asked why the MP did not inform Parliament or the minister responsible for the distributing of the relief items before going to the press, despite it being crystal clear that the MP was “forcefully” interviewed on the spot by the press.

He continuously used condescending words on the MP, cutting in interviews he once had with Mrs. Konadu Rawlings to draw parallel comparisons against her daughter.

Paul Adom Otchere is not new to controversies as he once admitted to lying against a colleague broadcaster and a lawyer, Arday Clegg.

He was called “evil and a liar”.