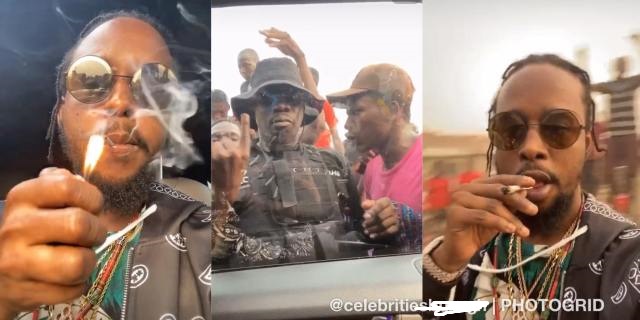 The use, possession, and selling of marijuana is illegal in Ghana. When caught, you’ll be dealt with accordingly.

So when rapper Kwaw Kese was seen sometime back with a substance believed to be Marijuana, he was jailed and fined after he was found guilty by the court of law.

Well, it appears some people are above the law as Jamaican musician, Popcaan who’s in Ghana was seen today smoking Marijuana right in front of some Ghana Police personnel. Yet nothing was done to him.

The question is, did he bring it into the country? Why didn’t the Immigration service stop him at the airport?

The second question is if he bought it down here in Ghana, who’re his suppliers?

Marijuana is a good herb with a whole lot of medicinal value. I wish it can be legalized in Ghana because of its socio-economic benefits.

However, if our very own Kwaw Kese was jailed for the possession of the illegal herb, whey can’t the same law work on others?

Watch the video below:

This is what the laws of Ghana say about the possession of marijuana:

“(1) Any person who, without lawful authority, proof of which shall be on him, has in his possession or under his control any narcotic drug commits an offence.

(2) Any person found guilty of an offence under subsection (1) shall on conviction be liable to imprisonment for a term of not less than ten years.”

And below is what the law says on the use of Marijuana:

“(1) No person shall without lawful authority or excuse smoke, sniff, consume, inject in his body or otherwise administer narcotic drug on his body.

(2) Any person who without lawful authority injects any person with, or in any manner administers narcotic drug to any person commits an offence.

(3) A person convicted for an offence under subsection (1) or (2) is liable to be sentenced to imprisonment for a term of not less than five years.”

New Photos Of Stonebwoy And Popcaan In Jamaica Pops Online