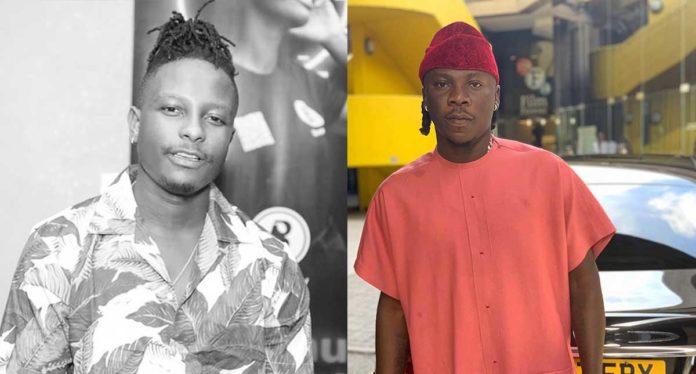 Its quite disheartening for any up and coming artist who has been identified deeply with a brand to be sideline all of a sudden because of a misunderstanding.

Its hurts the more when the artist is publicly humiliated and subtly described as ungrateful in the public arena when his side of the story hasn’t been heard.

To make matters worse, Stonebwoy added more salt to the chap injury by releasing a statement that turns to terminate any existing agreement he had with Kelvyn Boy because of his conduct.

These aside other public acts of the dance-hall artist, has pitched his fans against the silky artist.

No amount of sin should have forced Stonebwoy to publicly disgrace the lad and intentionally or unintentionally pitch his followers against Kelvyn Boy.

Comments after the release of the statement has been one insult after the other.

Fans just like their boss, have described Kelvyn Boy as ungrateful and called him names after the whole debacle came to bear.
These fans who have just joined the insulting brigade, have no idea the wrongs of Kelvyn Boy aside that he is ungrateful. A word subtly used first by Stonebwoy.

I honestly believe Sarkodie did not have everything smooth with Strongman Burner. There were definitely ups and downs. Disagreement here and there but Sarkodie never ,either on radio or Tv described his then artist negatively. He employed tact and apt in his relationship with the lad.

A clear example was when Strongman chided Hammer for his comments that he never planned to sign him. That was a grave insult on ther personality of Hammer, but Sarkodie never publicly attack his artist. Privately, he might but not publicly.

It seems Stonebwoy amid all his accolades lacked the most common thing, management.

Unlike Sarkodie, Stonebwoy decided to throw the baby away with the bad water.

I’ve worked with Sarkodie, R2Bees & others but none of them helped me like Mr Eazi- Guiltybeatz

Driver Runs Over Policeman To Avoid Arrest On Madina-Spintex Road

Quamina MP dating fantana as he squeeze her ass in ‘Wo...