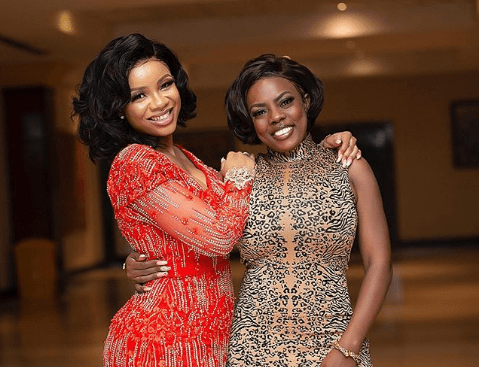 Many have wondered how Serwah Amihere, a girl from Labadi who has been described by many as a “slay queen”, could make it as far as becoming the number one news anchor on GhOne Tv and be winning awards.

Well, her boss and bosom friend, Nana Aba Anamoah has shared more light into her “daughter’s” life before she became the talk of town.

According to Nana Aba Anamoah, Serwaa Amihere was a lost empty headed girl who knew next to nothing about broadcasting, news and social threads.

Nana Aba Anamoah described her as a lady who had big hair and nails and a long eye lashes fitting the description of a Slay Queen.

“When i met Serwaa, she knew nothing about news. she had a different lifestyle. she was the girl who wear big hair, long lashes , long nails , skimpy dresses. She wanted to be in the media but was lost. Everyone looked down on her” she told Kweku Simtim Minsa on his KSM show

“we went through a few conversation, listening to her i saw a girl who was lost and didn’t know where to go to. Every single person she spoke to , if its a man he wanted to sleep with her” she added

However the celebrated news anchor brought her prowess to bear when she changed Serwaa Amihere from being a lost slay queen into a respected newscaster and an award winning broadcaster.