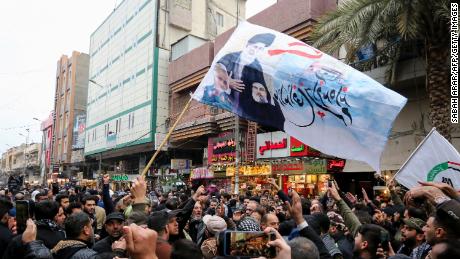 Senate Democrats — and two key GOP senators — slammed a classified briefing Wednesday on the strike that killed Iranian commander Qasem Soleimani, charging that administration officials failed to provide evidence to show the attack was imminent and dismissed the role Congress should play in deciding to take military action.The sharpest of the criticism came from two of President Donald Trump’s Senate allies: Republican Sens. Mike Lee of Utah and Rand Paul of Kentucky. Lee said after the briefing that it was the “worst briefing I’ve had on a military issue” during his nine years in the Senate.In an interview with CNN’s Wolf Blitzer on “The Situation Room” on Wednesday, Paul said the briefing was “an insult to the Constitution.”

“In the briefing and in public, this administration has argued that the vote to topple Saddam Hussein in 2002 applies to military action in Iraq. That is absurd,” Paul told Blitzer. “Nobody in their right mind — with a straight face, with an ounce of honesty — can argue when Congress voted to go after Saddam Hussein in 2002 that (they) authorized military force against an Iranian general 18 years later.”Paul later added, “There was no specific information given to us of a specific attack. Generality — stuff that you read in the newspaper. I didn’t learn anything in the hearing that I hadn’t seen in a newspaper already.”

‪Lee called the way the briefing played out “un-American” and “completely unacceptable,” given that the administration suggested that Congress shouldn’t have a role in approving Iran military action. He said the administration would not commit to a new Authorization for Use of Military Force or a cite a reason for coming to Congress before taking military action.”At one point one of the briefers said something like, ‘Don’t worry, we’ll consult you,'” Lee said. “Consultation isn’t a constitutional declaration of war. Drive-by notification or after the fact lame briefings like the one we just received are inadequate.”Paul and Lee also announced they would support the War Powers resolution sponsored by Democratic Sen. Tim Kaine of Virginia, which would limit the President’s ability to use military force in Iran.Four senators in the room said the briefing became tense and heated amid repeated questions from senators about the intelligence regarding how imminent a future attack would be and the legal justification for striking Iran.

The administration representatives ended up leaving before all questions were asked — departing after the allotted time of 90 minutes. Several senators, including Lee, said the briefing itself lasted 75 minutes.Secretary of State Mike Pompeo, Defense Secretary Mark Esper, Chairman of the Joint Chiefs of Staff Mark Milley, CIA Director Gina Haspel and acting Director of National Intelligence Joseph Maguire briefed senators and House members on Wednesday.Esper pushed back at lawmakers who slammed the briefing Wednesday, saying, “Most members of Congress do not have access to the intelligence that I think was the most compelling.”On Tuesday, Esper had said that the “exquisite intelligence” on the threat posed by Soleimani that drove the US military to target him in a drone strike would be shared only with the Gang of Eight — a group of eight lawmakers made up of congressional leaders from both parties as well as the Intelligence Committee chairs — saying “most Members (of Congress) will not have access to that.”Senate Democrats pressed for specifics of the targets and timeline, and while senators said the timeline was described as within “days,” the information provided in Wednesday’s briefing did not explicitly back that up, according to Democrats.At one point, Sen. Amy Klobuchar of Minnesota, a 2020 Democratic presidential candidate, pressed on the imminence of the attack. Several senators said they came away with the sense her specific question remained unanswered.Administration officials were pressed about whether the attacks would be carried out especially since Iranian Supreme Leader Ayatollah Ali Khamenei apparently had not signed off on what Soleimani was plotting, sources said.”I walk away unsatisfied on the key questions that I went into this briefing with,” said Sen. Robert Menendez of New Jersey, the top Democrat on the Senate Foreign Relations Committee. “It makes me concerned that we cannot have clarity on those key questions — imminency, target, all of those things.”House Democrats expressed similar concerns that the administration officials failed to justify claims of an imminent attack, and House Speaker Nancy Pelosi announced that the House would vote Thursday on its Iran War Powers resolution.The administration officials said the strike was justified under Article II and the 2002 Authorization for Use of Military Force, or AUMF. That resolution authorized the Iraq War, and the officials said the strike was justified under it because it took place in Iraq. But the officials said the AUMF would not cover any military action inside Iran.Republicans expressed frustration over the Democratic posture during the briefing, with Republican Sen. Lindsey Graham of South Carolina saying they were “out of their minds” for how they approached the strikes.”They don’t want specifics. I was really disappointed in their behavior in there because it was clear to me that this guy was up to no good in the moment,” Graham said.Following the briefing, a group of Democrats, including Senate Minority Leader Chuck Schumer, came to the cameras to voice their concerns. Shortly after, Pompeo walked out behind them, and appeared to be waiting to speak at the cameras as well. After a few minutes of listening to the Democrats, however, Pompeo departed the Senate basement without making a comment.This story has been updated with additional developments Wednesday.

Bill Gate says it’s dangerous for Trump to halt US funding of the W.H.O