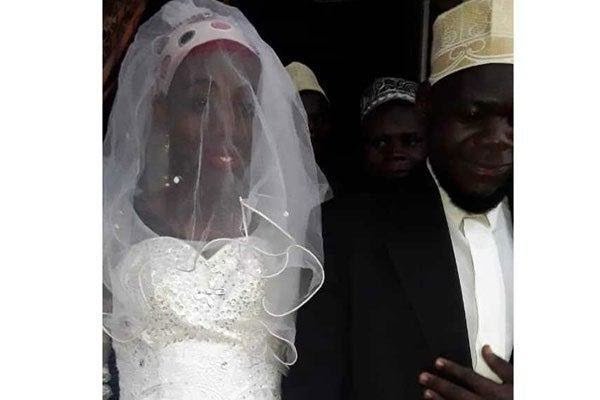 An Ugandan Imam has been suspended for unknowingly tying the nuptial knot with a fellow man, Daily Monitor reports.

Sheikh Mohammed Mutumba, the Imam of Kyampisi Masjid Noor mosque in Kayunga District, was suspended as investigations into the shocking incident commenced.

According to regional Kadhi Sheikh Abdul Noor Kakande, the move to suspend the 27-year-old is aimed at preserving the integrity of the faith.

A fortnight ago, Mutumba exchanged vows with his ‘wife’ Ms Swabullah Nabukeera after meeting at the Kyampisi mosque.

However, two weeks into their union, the couple is reported not to have gotten intimate as the ‘bride’ claimed that she was on her period.

It’s during the waiting period that the Imam’s neighbour accused his newly wedded wife of jumping over a wall separating their houses and stealing clothes and a television set.

The matter was reported to the police. According to the Kayunga District criminal investigations officer, Isaac Mugera, Nabukeera was wearing a hijab and sandals when apprehended.

During interrogations, Nabukeera revealed that his real name is Richard Tumushabe and that he duped Mutumba so as to get his money.  He was charged with impersonation, theft and obtaining goods by false pretence.

Nuuru Nabukeera, Tumushabe’s alleged aunt, was also arrested and admitted that Mutumba had paid dowry including two goats, two bags of sugar, a carton of salt and a Koran.

She claimed that she did not know her ‘niece’ was male as she got to know him when he was already an adult.

How Kwame Nkrumah used metaphor as a political weapon against colonialism